This past summer I participated in a really interesting workshop on intuitive painting at Spruill Center for the Arts. It has definitely impacted the way I've been approaching my art lately so I thought I would share a little about my experience.

When I first signed up for the class I thought, "Hey, I could use a cool new painting for my dining room. Maybe I can create something that will match my chairs." Within about 60 seconds of the class starting, my little plan was crushed. We were given two rules - the first was to paint with no goal in mind. We had to scrap any pre-conceived plans, color schemes, etc. and just follow "the flow". The cornerstone of intuitive painting is to experiment and not worry about the outcome. Being a stickler for details, the concept of painting with no particular goal was really foreign to me. You know the quote that goes something like, "Life is about the journey, not the destination?" Well, that's basically intuitive painting in a nutshell. It's all about trying things you normally wouldn't and learning from the experience. And know that most likely, you are going to end up with a painting that looks like poo. And not care!

Which leads me to the 2nd rule of the class: silence your inner critic. The goal was to paint freely. How can you do that if you're worried with how something looks? We were told not to think about our painting as being "good" or "bad"...it just is what is is. Matter of fact, we couldn't even compliment our neighbor.

So, once the rules were out of the way, we got to work. We all started with a giant canvas (mine was 30 x 46) and we had about 3 hours to do whatever we wanted. It was so interesting to see how not only mine, but students' canvases evolved over time. The first picture posted above is what I accomplished after about two hours. However, we couldn't stop painting until the class was over so I had no choice but to keep going. Since I still had about an hour left I thought, "What if this is just the background for something else?" That's when I started playing around with the idea of the hummingbirds. And if you've seen my actual hummingbird paintings, you'll know these are WAY different than what I've done before. I sort of liked the "primitive yet funky" vibe.

There were a few "ah ha!" moments during the class: 1) I loved the effect of paint drips in the background. I've had always wanted to try that! 2) I loved using tools and random objects to create additional texture in the background. I've been using additional texture in my new works and love the added character and dimension this brings. 3) Metallic paints are really fun! You may notice I've been using a lot of gold lately :-)

If you've never taken an intuitive painting class before then I hope you try it. If for no other reason, it's extremely therapeutic. And, I've found it to be a great exercise to loosen up, especially if I'm in a rut. If you're around the Atlanta rea, check out Diana Toma's class at Spruill. It's a really fun way to tap into your creative potential. 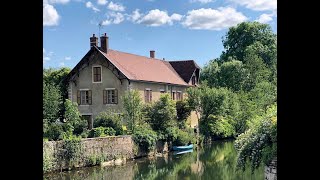 Enchanted: Under the Spell of Spring